This week I've been working on four things: props for the game, updated entity models, improved texture rendering, and a 3D sound system.

The props system was in place for a few weeks now, and it's about time I started adding some actual assets into the game. 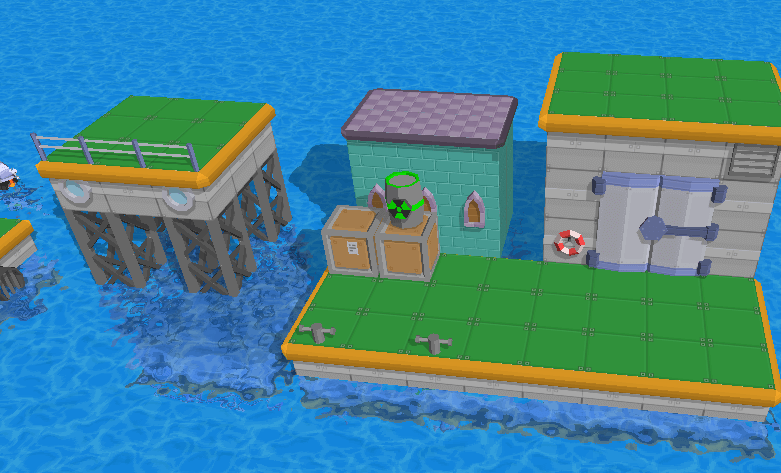 Some of the new props in the game. This map is not an actual level!

These props are static objects that are part of the map, and while they can't be animated, they can be collided with. This way, for example, I can jump on crates and fences.

Props are different from entities that can be interacted with, such as jumping platforms and collectibles, which I've also updated this week. Instead of the collectible coin there's now a spinning crystal, and the appearance of vertical and horizontal boost platforms has been redone too. Instead of a finish flag there's now a platform with a spinning checkerboard pattern. The general look of the game is gradually moving towards what I have in mind, but the details on the setting and storyline are yet to be revealed!

I've improved the rendering of the textures and have given the player an additional option in the settings menu to change the texture smoothing. Currently supported smoothing techniques are Nearest, Bilinear and Trilinear. Combined with Anisotropic filtering this heavily reduces the amount of visual artifacts and flickering.

The engine supports anti aliasing (FxAA) which can be toggled in the options menu, but personally - I prefer the aliased look. I'm thinking about adding another different anti aliasing technique.

And last but not least - the engine now supports 3D (and 2D) sounds! This is my first time working with OpenAL, and although I'm not a reliable source on how a 3D audio system is supposed to sound like - I think it's pretty good.

The sound system is fairly basic right now, but perhaps that's all I need for this game.

As always, you can check out all the development videos of Speebot by viewing the full playlist on YouTube.