Just dropping a quick update here - the development of Speebot is going better than ever! Now that most of the engine work is done, I am focusing mainly on level design and gameplay.

The game now is nearing 50 levels, which will mark the end of World 1. Speebot will feature 4 differently themed worlds, totaling in 200 levels together! That's the plan, anyway.

As I've mentioned before, a new mechanic or item is introduced every few levels, and the levels themselves grow in complexity and difficulty. I'm trying to make the levels varied - some more puzzle oriented than others, some have multiple exits and different ways to beat the level, and so on. 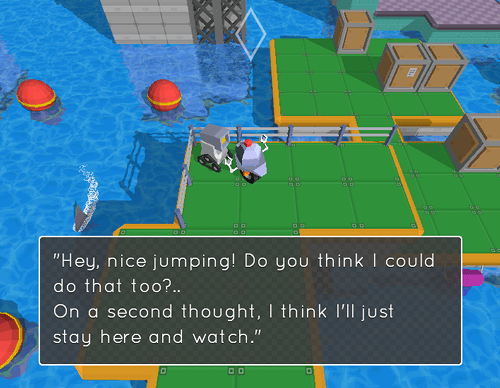 Speebot chatting to another robot.

I plan on releasing a playable demo at some point in the future, but there is a number of things on my to-do list that needs to be done first. This includes improving current sounds and composing the soundtrack for the first few levels.

That's all for now!